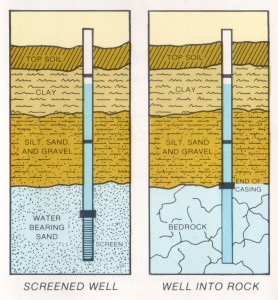 A screened well is one in which the water is obtained from a water bearing sand formation. The well is drilled and steel casing is installed down through the top soil, clay, silt, sand and gravel until a water bearing sand is encountered. Then a screen is attached to the end of the casing and the well is developed to remove the fine sand near the screen so that the water can flow into the well.

A rock well is one which terminates in bedrock or sandstone. Such a well is drilled in an area where no water bearing sand is found above the rock. The well is drilled with steel casing installed until either sandstone or bedrock is encountered. A tight joint is made where the pipe driveshoe contacts the rock, and then drilling begins in the rock. The drilling continues downward until sufficient water is obtained.

In bedrock, Siirtola Well uses a down-the-hole hammer. It hits at about 600 blows per minute, like a jack hammer, to create openings to existing water-bearing cracks and crevices.

Once your well is drilled, you will need a pumping system to move the water. In most drilled wells a submersible pump is installed. A properly installed pumping system will give years of dependable service.